The EarthTemp community position paper, which reviews the state of art of measuring the surface temperatures of Earth and recommends steps to improve our understanding, has been published as a discussion paper in the open access journal Geoscientific Instrumentation, Methods and Data Systems (Discussions) (GI(D)). As the paper aims to capture a community position and influence future science funding and policy decisions, all interested colleagues are encouraged to submit comments or reviews during the discussion phase (until 6 August) which will then be considered (together with the invited peer-reviews) when preparing the final version of the paper. 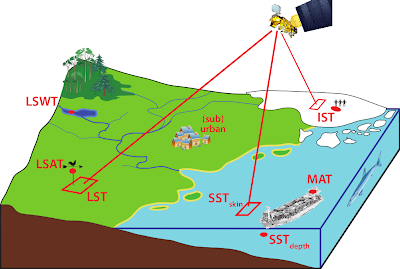 The workshop and the paper
The paper captures the ideas and recommendations developed during the first annual EarthTemp Network meeting in Edinburgh (25-27 June 2012), with invited 55 participants from five continents. The meeting placed particular emphasis on encouraging discussions, networking and collaboration between the participant, featuring networking activities to build relationships across the new community, overviews of the state of the art in the field, and a series of 20 intensive small-group discussions on current gaps in our knowledge and scientific priorities on 5 to 10 year timescales across a number of themes. Chris J. Merchant, the PI of the EarthTemp network, drafted a first version of the paper (available on EarthTemp.net) based on notes and presentations from the chairs of the breakout discussions. The current version for peer-reviewed publication was then developed in several stages, incorporating comments from the Network meeting participants as well as more details, examples and references. The wider community of surface temperature providers and users now has an opportunity to add comments and reviews during the open review phase of the journal Geoscientific Instrumentation, Methods and Data Systems (Discussions) (GI(D)). Like all open access journals published by the European Geoscientific Union (EGU), GI(D) has a two stage publication process: Submitted papers are published very rapidly after an editor's access review as discussion paper. This discussion paper is then sent out for peer-review to reviewers assigned by the handling editor. At the same time, all interested colleagues also have the opportunity to submit comments or reviews through the GI website. Both the official invited peer reviews and the spontaneous comments are public (the official reviewers may chose to remain anonymous, though), and the authors are required to respond (publicly) and address all comments adequately for the final version of the paper. Besides being open access, this open review system adds another aspect of transparency to the work, as readers can monitor the quality of the reviews and the authors' responses. The deadline for comments on the GID journal website is 6 August 2013. We plan to communicate the paper and its recommendations widely to a range of scientific organisations, funding and policy bodies. 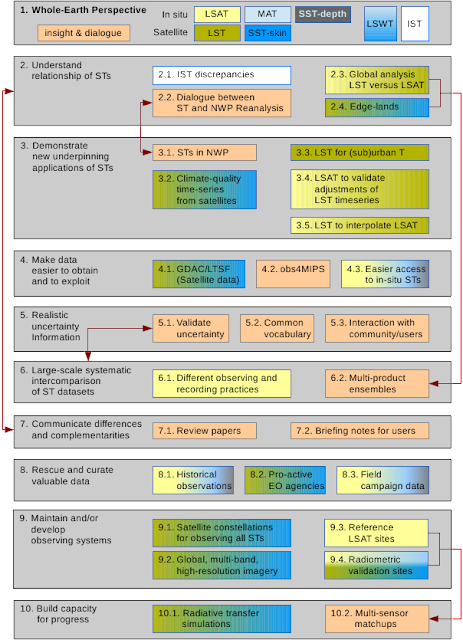 Your views and comments
We want to encourage all users and providers of surface temperature data, in all domains and for all applications, to contribute your views on the recommendations made in the paper, through the open review on the GID journal website. In view of recommendation 3, we would particularly like to hear from users from outside the climatological and meteorological communities, for example scientists who apply temperature data to questions in ecology, health and epidemiology, society, or public engagement: what kind of data is useful for you and what are barriers to their use in your work?

If using certain versions of IDL (mine for example - 8.0) and sequentially reading, manipulating and then writing out the files there is a pretty spectacular bug in IDL that causes a random crash. It seems that IDL is not dynamically clearing memory between reads for certain unfathomable file combinations. If you are getting issues randomly in such a loop then reset all the read in variables to =0 at the end of the loop each time and these crashes will simply disappear. Ours is clearly not to wonder why, particularly on a Friday ...
Posted by PeterThorne at 10:54 AM No comments:


Today we released a fourth beta release of the databank holdings. The associated readme file is available at ftp://ftp.ncdc.noaa.gov/pub/data/globaldatabank/monthly/stage3/updates_to_beta4.pdf. The fourth beta release involves changes to the metadata format (see the README) and the provision of files in netcdf format. We have made every effort to make these netcdf files compliant with the CF conventions. Put more honestly we have managed to fool the available online python script-based checker into concurring that these are CF compliant. But we would greatly appreciate anyone taing these for a road test and telling us if we are missing things or things break so we can modify the netcdf file formats as necessary.

The formal release is still planned to occur upon acceptance of the methods paper which at this time remains as submitted status at the journal.

The set of stations remains over 30,000, with many longer stations than available in GHCNMv3

Posted by PeterThorne at 7:52 PM No comments:

Notes from meeting open to all initiative participants

Last week we held a call with an open invitation to all those actively participating in the initiative. This call concentrated upon where we stand today and where we want to aim for in the coming two years. It is hoped that we can release a new Implementation Plan to replace the current one by the end of July.

The call notes provide a reasonable snapshot of where we stand today as well as what the open issues are and hence I am publicizing via the blog (there are very many meetings of the steering committee and various groups which it would get more than a tad repetetive (and boring) to highlight each one on this blog but salient / general interest calls we will highlight). Comments on the call notes and constructive suggestions for what we should be aiming to do in the coming two years are most welcome.

The call notes are available from here.

As a heads up we also intend to release a fourth beta of the databank this week. This will include a modicum of further station blacklisting but also a (hopefully) CF-compliant netcdf format version so that people can test this and highlight any issues in our netcdf conversion before formal release of a first version - the timing of which is still dependent upon methods paper acceptance. We'll have a further post when this is up.
Posted by PeterThorne at 10:54 AM No comments: