So what changed between beta1 and beta2?

Even though we documented changes from the beta1 release to beta2, did we actually change the overall results of the databank? Well, there was a noticeable drop of stations over time, especially over the past 50 years:

However this does not mean that we are losing important stations. It was discovered through Nick Stokes’ blog that there may have been duplicates within the beta1 release. After some analysis, we tweaked the algorithm to remove these duplicates. Because of this we have lost the station count, however we are still seeing many more stations than the current operational product of GHCN-M version 3. In the end however, addressing these changes from beta1 to beta2 did not make a major difference on the annual global anomalies.

We are still in beta, however we are pushing forward for a version 1.0.0 release soon!
Posted by Jared Rennie at 9:16 AM No comments: 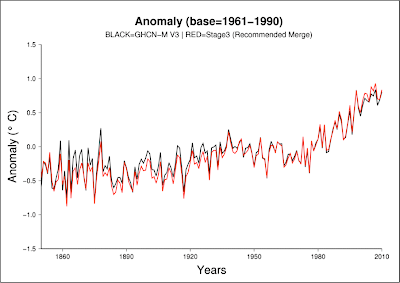 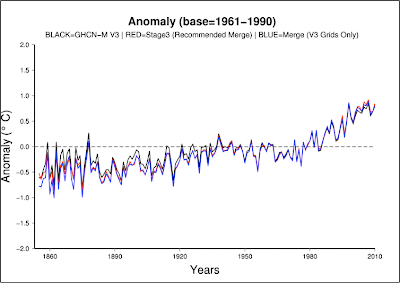 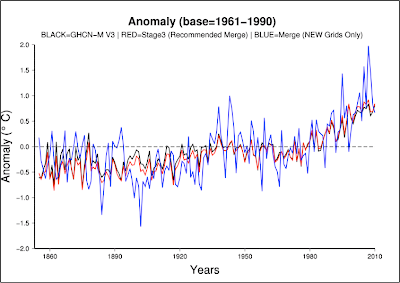 So, most of the difference appears to relect better sampling regions already sampled. The question of why and what impact it has on homogenization efforts is 'future work' ... and is why we now need multiple groups to take up the challenge of creating new data products from the databank.
Posted by PeterThorne at 10:58 AM 2 comments:

Today, we have released our second beta version of the global land surface databank. This update includes some changes that were made in response to comments on this very blog, along with a few minor tweaks.

The beta2 release can be found here: ftp://ftp.ncdc.noaa.gov/pub/data/globaldatabank/monthly/stage3/. Within that directory one can find all the data and code used, along with some graphics depicting the results of all the merge variants. A technical description of the merge program (similar to beta1) is also provided, along with a new file documenting changes from beta1 to beta2.

Beta1 is not forgotten and lost forever. All the data and code from beta1 is located in our archive if anyone still wishes to access it: ftp://ftp.ncdc.noaa.gov/pub/data/globaldatabank/archive/monthly/stage3/beta1/

Some of the major changes include the following:
The original merging methodology can be found here, as well as a description of the changes from beta1 to beta 2 here.

The deadline has passed for new data to be added for an official version 1 release. However there is still plenty of time to provide feedback on all the methodologies used in constructing the databank. Your comments have helped us so far, and we welcome any more that may arise.
Posted by Jared Rennie at 1:43 PM No comments: