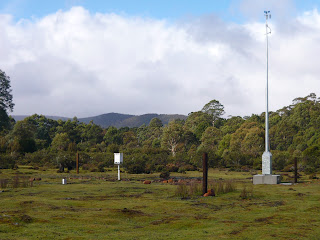 The ACORN-SAT station at Butlers Gorge in central Tasmania
A new homogenised daily temperature set, the AustralianClimate Observations Reference Network – Surface Air Temperature (ACORN-SAT)data set, has recently been released by the Australian Bureau of Meteorology. This data set contains daily data for 112 stations, with 60 of them extending for the full period from 1910 to 2011, and the others opening progressively up until the 1970s. (1910 is taken as the starting point, as it was only with the formation of the Bureau of Meteorology in 1908 as a federal organisation that instrument shelters became standardised).

The new data set applies differential adjustments to different parts of the daily temperature frequency distribution, using an algorithm which matches percentile points in the frequency distribution with those at reference stations before and after an inhomogeneity. This takes into account the fact that some inhomogeneities in temperature records have different impacts in different weather conditions – for example, if a site moves from a coastal location to one further inland, the difference in overnight minimum temperature will normally be greater on clear, calm nights than on cloudy, windy nights, and clear, calm nights are also likely to be the coldest nights (at least in the mid-latitudes). If such effects are not accounted for, adjustments which homogenise mean temperatures may not homogenise the extremes.

The method is conceptually similar to that of Della-Marta and Wanner (2006), while differential adjustment methods of this type have also been developed by a number of other authors. The ACORN-SAT data set, however, is believed to be the first implementation of such methods in a national, year-round data set.

A detailed evaluation of the method was carried out before finalising its implementation. One of the interesting findings from the evaluation was that, while some earlier studies had suggested that reference stations required a very high correlation (0.8 or above) for use in daily adjustment methods, the ACORN-SAT evaluation found that correlations of 0.6 or above produced satisfactory results. The reasons for this difference are yet to be fully evaluated. Two potential explanations are that ACORN-SAT uses multiple reference stations (normally 10) whilst the other methods were evaluated using a single reference station, and that the ACORN-SAT evaluation took place using real data, whilst the other evaluations used artificial data sets whose properties may not necessarily match real-world inhomogeneities. This result is critical for the use of such methods in Australia, where observing networks are sparse in many areas by the standards of developed countries; had a minimum correlation of 0.8 been necessary many locations would have had no available reference stations.
Documentation of the data set at all points was considered to be critical. The homogenised and raw daily data, all of the transfer functions used in the adjustments, and other relevant documentation, are available on the ACORN-SAT website. This information would allow the data set to be reproduced from the raw data should anyone wish to do so.

The methods used in the development of the data set have recently been published in a paper in the International Journal of Climatology. A more extensive technical report has also been published by the Centre for Australian Weather Climate and Research and is available on the ACORN-SATwebsite. Other material published on the website include a second technical report which compares outcomes from the new data set with other national and international data sets, and a station catalogue containing metadata for the 112 locations.

(One of the author’s personal goals is to visit all 112 locations; the 91st, Cape Moreton in Queensland, was visited in April. Occasionally his ambitions have exceeded his vehicle’s capabilities – drowning his last car while attempting to get out of a remote site in the far north of Western Australia).

The new data set will be used for operational climate analysis by the Australian Bureau of Meteorology, including reporting of annual national temperature anomalies. (Preliminary analyses indicate that the warming trend in the new data set, about 0.9°C over the 1910-2011 period, is similar to that in the data set previously in use). It will also allow, for the first time, analyses of century-scale changes in Australian temperature extremes. Such analyses are expected to be released over the next few months.

Trewin, B.C. 2012. Techniques used in the development of the ACORN-SAT dataset. CAWCR Technical Report 49, Centre for Australian Weather and Climate Research, Melbourne.
Posted by Blair Trewin at 1:11 PM No comments: